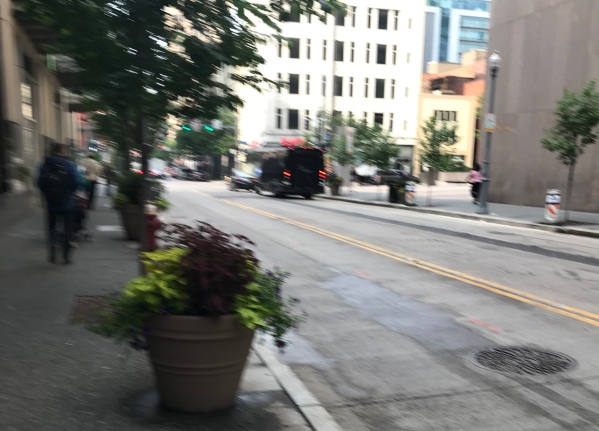 Tonight there was bologna and cheese, one box, about 20 sandwiches or so amidst other boxes of expected peanut butter and jelly. As we’ve come to learn, and probably shouldn’t have had to learn, it’s easy to get tired of eating peanut butter and jelly night after night. As we were passing out granola bars, mouthwash, sandwiches and socks, we could hear Dr. Jim Withers inside the mobile medical unit providing an informal orientation to the newest batch of medical students beginning their four-week rotation with Pittsburgh Mercy’s Operation Safety Net, “Our salvation is working with the most excluded first.”

Over the past seven months, a few of us from Point Park University’s Clinical-Community Psychology Graduate program have been engaged in advocate ethnography with Operation Safety Net, immersing ourselves in work that Operation Safety Net does night after night, cultivating relationships with both the staff and the people that they serve, taking note of all the ways the staff attempts to pay attention to and take care of those that are among the most excluded—those who sleep on salt-stained, frigid cement on the coldest of Pittsburgh nights, those who would otherwise refuse medical care, having been harmed or ignored by medical and psychiatric establishments. At the same time, we are chronicling the stories and experiences of those who live on the street or are at risk of finding themselves on the street, doing our best to attest to the multiplicity of perspectives, the many ways one can describe what it’s like to be amongst the excluded, the otherwise forgotten, the relatively voiceless.

As a research methodology, advocate ethnography isn’t interested in adding to the stacks and queues of unread academic papers—instead, it is interested in using research to transform, agitate, and incite social change. Advocate ethnographers utilize a variety of different methods: cryptic notes that are quick jottings intended to be reminders for later on, perhaps penned in the back of an SUV as we drive from one camp to another that will eventually be expanded on into narrative notes, a chronological and more detailed explication of the events witnessed. In addition, advocate ethnographers engage in open-ended interviews, attempting to understand what it is like for both the workers of Operation Safety Net and the people they care for. To give voice to, to advocate for others, it is of the utmost importance that, as researchers, we are as sensitive as can be, as careful as possible, to have fidelity to the experiences as lived by those who experienced them. To advocate well, we must first listen and then listen some more, act in service, and bear witness.

On the median, Dave stood. We pulled over to ask him and his friend if they needed anything—medical care, food, water, socks, the things we typically have available if necessary. Dave responded fairly quickly that he could really use some medical care, that he was “all messed up.” We told him to cross the street and meet us in front of the library, that over there the medical students could take a look at what was going on, assess the situation. We stood there in the afternoon caught in both the glare of the sunlight and those who walked by, as Dave lifted his pant leg, pulled down his sock, and exposed a wound that had become infected, dangerously so. After consulting one another, the medical students decided that Dave needed to go to the hospital, they were worried that the infection wouldn’t subside without IV antibiotics that could only be administered if Dave was admitted. The five of us out on rounds that night were split down the middle as best as possible—half of us were going to the hospital with one of the medical students, advocating for Dave, making sure that he was able to get the care that he needed and wasn’t turned away.

As Dave, the medical student, and I walked into the hospital, I was afforded a view that I hadn’t otherwise seen. I watched as security guards sighed and quietly made noises signifying annoyance at Dave. I saw the passive aggression enacted by admitting staff as they handed across a stack of forms that Dave, had I not been there to help with, wouldn’t have been able to fill out properly. I sat with him, surrounded by the dull hum of reality television and oppressive white lighting, talking and waiting. I learned about his family, his kids, his childhood. After a few hours and some needed convincing provided by the medical student on rotation, he was admitted. Being able to sit there with Dave, keep him calm, continually alert him as to what was going on, where he was, and make sure he was afforded the care he needed in that moment, I may have been conducting research in one way or another, advocating as well, but even more importantly I would argue, he wasn’t there alone.

Originally Posted by The New People, 2016

Over the past two semesters, a few of us from Point Park University’s Clinical-Community Graduate program have been engaged in advocate ethnography. In conjunction with Pittsburgh Mercy’s Operation Safety Net, we have been serving those living on the streets, cultivating relationships and transcribing their stories. Scribbled in notebooks, jotted quickly in the margins, our research is qualitative; our data consists of lived experiences. We’re on the outside striving to be invited into the lives of others, to be allowed into their experience. The outliers, the perpetual outsiders on the edge of society, are often avoided, scorned, and disdained. Advocate ethnography isn’t interested in adding to the stacks and queues of unread academic papers—instead, it’s interested in using research to transform, agitate, and incite social change. Immersing ourselves in this community, we attempt to better understand the lives of a population so often misunderstood.

There were four of us out on rounds that morning.  Packed into the blue SUV, we pulled up past a house that was isolated from the rest, surrounded by woods. I am continually amazed at how the “camps” are so often hidden in plain sight, but this one was a little different. The path we followed was very well hidden, tucked neatly away into a thickly wooded area that you would have never believed was only about 100 yards from the busway.

Quietly we walked, one after the other, bobbing and weaving through tangled brush until we arrived at the site.  Shawn*, accompanied by one of the two medical students with us, went to check if anyone was home. After a few moments of silence, we heard rustling and then the sounds of voices, muted both by the tent and our distance from the site. Growing louder and more heated, one voice shouting at the other angrily to leave. Two of us kept our distance to give them space to sort things out while Shawn approached the tent.

I stood around, becoming increasingly more uncomfortable as the arguing continued to escalate.  Finally, two people emerged from the tent: a man and a woman.  She hastily lit a cigarette, as he continued complaining about the unkempt state of their home, tossing around some of the trash that had begun to accumulate, shouting at her to leave. Visibly upset, she hurriedly started downhill towards the busway, leaving her phone behind. Shawn handed it to me, and I had to run to catch up to her, “Jocelyn, wait!” She stopped to face me and without a word I passed her the phone.  I didn’t know what to say, there didn’t seem to be anything I could say. This argument, one that for most of us would have been had behind closed doors, was instead in the unexpected company of four strangers.

After we left, we tried to find Jocelyn to make sure she was all right, but we were too late, she had already gone.

And also, beautifully, they welcome us, “come on in.” I’m invited down and shown where I can sit, told to watch my step and be careful not to trip. We chatted about everything from Cincinnati, to poor treatment from the EMTs, to Justin Bieber’s performance at the Video Music Awards—I felt as though I were visiting old friends. A medical student checked up on a previous injury as the rest of us passed out PB&J’s. Wanting to reciprocate, one of the women started a fire with rubbing alcohol in an old tin can as the five of us crouched around not knowing what to expect. She reached into her tent and pulled out an acoustic guitar. Strumming and singing, she shared her passion with us. The song was her own, and I was moved by her words. With many more stops to make, we had to get going, but she insisted on walking us out. She proceeded to use the light from her cell phone to guide us all the way out of her home, through the woods, and back to the path leading to the street.

We often dismiss people who call the streets their home, making judgments based off assumptions without caring to know their stories. These two anecdotes are glimpses into the lives of some of the people we have encountered—as we sit with them, talk with them, and are changed by them.  Our assumptions and biases transformed into understanding.  We can’t possibly capture the breadth and complexity of every human experience in this brief article, but our hope is that some insight into their lives might reveal that they are not so different than us.

* All names used in this article have been changed